As I've been researching for one of my final papers, I came across a section in Charles Cousar's The Letters of Paul that discusses the more recent trend in biblical scholarship to define pistis Christou as "faith of Christ" instead of "faith in Christ." The latter was the chosen translation of the Reformation so that "Christ" became the object of faith.  Thus, the Reformers understood Paul to be "calling for trust in Christ rather than the carrying out of the law's commandments," which was entailed in the doctrine of justification by faith (130). In this revised reading of pistis Christou, "believers are justified not by their believing but by Jesus Christ's faithfulness in fulfilling God's redemptive purposes" (130). In anticipation that some might think replacing the preposition "in" with "of" means denying the importance of faith, Cousar offers three points defending why he believes this is not the case. In these three points, Cousar sees a reorientation of what faith means rather than the nullification of faith: 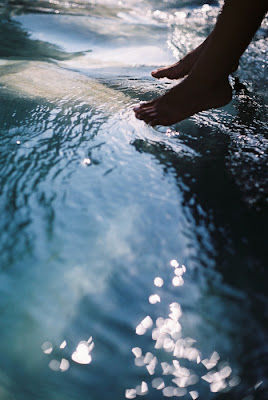 1. The essence of Paul's understanding of the Gospel supports the notion that "the salvation of 'those who believe' depends not on their knowing or believing but on the action of Jesus Christ who fulfills God's purpose. To put it another way, human faith is not the precondition for receiving God's grace, but the responding "Yes" to a grace already given in the Christ event" (131, emphasis added).

2. Human faith is not so much a response of the individual as much as "participation in the faithful obedience of Jesus. Believers claim their solidarity with him in his death, including fidelity to his divine vocation" (131). As far as I can tell, Cousar is not defining participation as some mystical union with Christ so that the individual believer is ontologically changed or somehow now shares in the divine nature of Jesus Christ. Participation is more in terms of sharing in the sufferings of Christ as an act of obedience that is carried out through the life of discipleship.

3. I found this point to be the most interesting. The response of the individual is "defined by the faith of Jesus. The Reformation understanding ("faith in Christ") has often resulted in a faith that is pure passivity, a "non-thing" that seeks only to avoid any taint of works. Jesus' faith, however, provides a pattern of response to grace that is active and aggressive, that risks much and becomes vulnerable to suffering. The believing community is drawn into the pattern of Jesus' faith ('conformed to the image of his Son' [Rom 8:39]), which is much more than the renunciation of works. Thus for Paul a bridge is built from justification to ethics" (131). Instead of negating the importance of faith, Cousar believes that the translation of pistis Christou actually opens up the individual and the community of believers to radical discipleship. And this takes the form of conformity to the image of Jesus Christ. And what do we witness in the life of Jesus Christ through the biblical witness? Radical solidarity with the least of those in this world. Faith defined in this way takes the disciple of Jesus Christ into the depths of this world's sufferings and death zones instead of some sort of escape from this present reality.

Whether or not some would find Cousar's presentation of the Reformed doctrine of justification by faith and the Reformers interpretation of "faith in Christ" to be sufficient (my guess is that some would not), I found it fascinating that Cousar seems to implicitly argue that faith means discipleship. Rather than faith as some sort of epistemic assurance of what Christ has done for me, faith is primarily an action. This, without doubt, has radical implications for how we can understand the life of faith for both the individual and the community of believers.
Posted by Unknown at 9:41 PM

Thanks for this - it clarified a nagging problem I have with my church Bible study's teaching of Romans. It's too passive, and subtly self-aggrandizing as well, especially when the emphasis is how we don't need the law anymore. This also draws a great bridge between Romans and what James teaches about true religion.

On an unrelated note, do you have any Barth book that you would recommend a new Christian to read? (grew up in a church, didn't take it seriously until two years ago)

Thanks for your comment. I actually think that defining pistis Christou as "faith *of* Christ" takes the focus all the more off the individual Christian or the community of believers. Justification now happens not because of any faith that I have *in* Christ, but happens first to last because of Christ's *own* faith.

I'm writing my paper on Romans 5:12-22. I've gotten a lot of this sort of translation of pistis Christou from scholars who see Paul as understanding the Gospel as an apocalyptic event. So I would actually understand sin as not simply something that you or I do as a choice or an action or a deed (or misdeed), but rather sin is also a "cosmic power." So this means that Sin actually enslaves me and has power in itself to *do* things -- it gives way to death and destruction. As such, you see in Romans 5:20 that because of the cosmic power of Sin, even the Law itself has been tainted and can be used to increase sin.

In the end, I think understanding pistis Christou as "faith of Christ" means the end of all human religion and shows us that it is solely through God's divine action in the cross and resurrection that we *already have been given* grace. The human creature as one who is opened up to faith is called to discipleship in this world.

I'm trying to work out what faith and discipleship all mean in light of these particular understandings of pistis Christou and sin. But I wanted to be clear that from my end of things, this doesn't affirm the role of the law or religion, but actually radically negates their power and ability to do anything but continue to enslave humanity.

In terms of Barth - I'm partial to der Romerbrief, but it is really difficult to understand what he is doing in that text without a lot of context. I personally love "Evangelical Theology" and find it to be incredibly encouraging. I'd start there.

I hope that helps!

Good points, Kait. Especially love #3. I was really enthusiastic about this stuff when I first discovered it a few years ago (thanks to Barth and CD II.2), but I've always grappled with the old question, addressed to Barth by his critics, of whether this apocalyptic framework actually leads to the action it intends. It is similar to the criticism addressed to Foucault and post-structuralism -- that is, once you've deconstructed everything (as Barth does in his 'Romerbrief' and Foucault does in 'Discipline and Punish' etc.) is nature thereby so negated that it is incapable of bearing a goodness not reducible to sin/power? Once we've abolished the Law, have we not abolished creation (nature)? This is the persistent criticism that Balthasar rightly pushed against Barth, and it really is at the heart of what divides Catholics and Protestants. Really, nothing else is worth dividing over.

Anyway, I would love for you to explore these lines of thought...and, indeed, you reveal a great deal of reflection already.

Thanks Kait, and will definitely check out Evangelical Theology.

So, forgive me if this is a rather broad question, but what is the spectrum of interpreting what Paul means when he says we are justified by faith? I suppose I'm asking what effect people have thought flows on from Paul's teachings.

Also, if justification is about the faith of Christ, will that change any kind of rhetoric that we have in churches? Like, should the emphasis on evangelicals be less getting people to confess their sin (although it is no less important), but more on sharing the wonders of Christ?